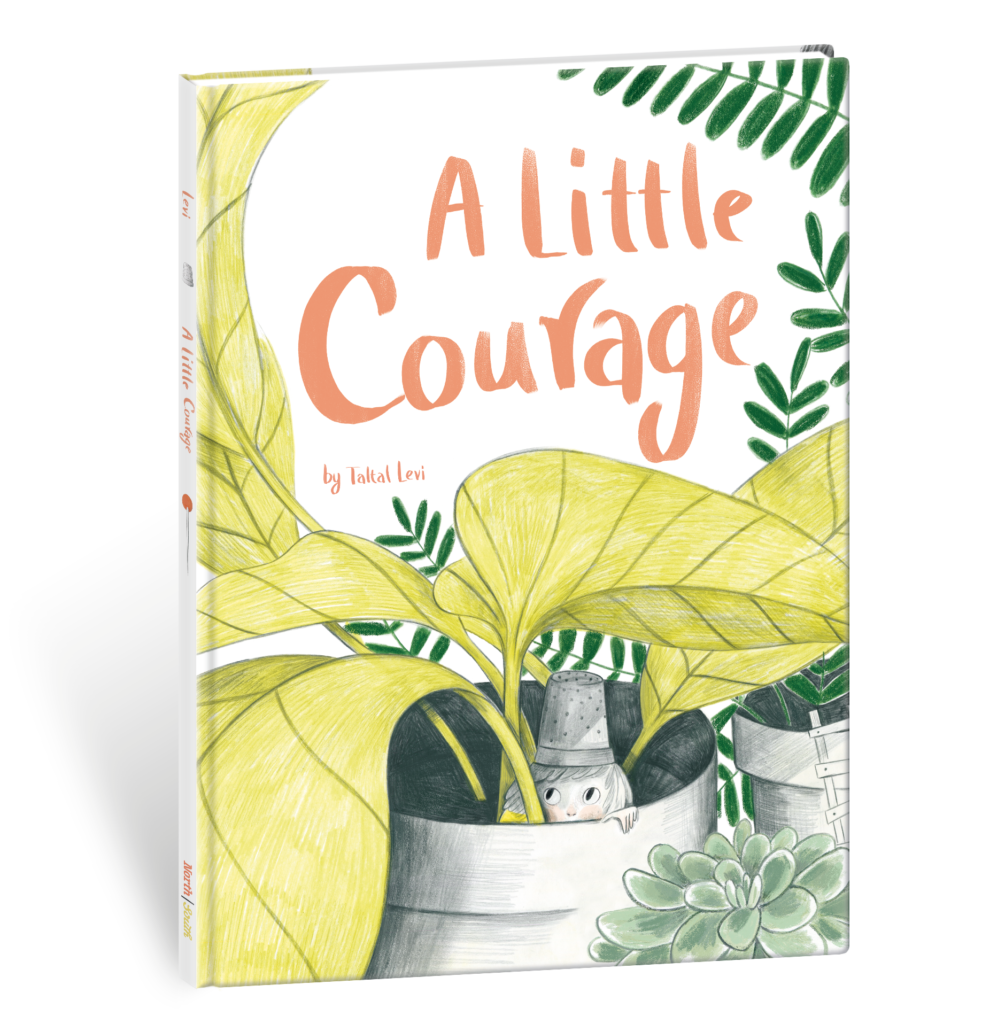 Taltal Levi‘s A Little Courage caught my eye even before I knew it was the story of a teacup-sized child who befriends a cat. There are many stories about finding courage, but few are illustrated with the grace and tenderness seen in Taltal’s work. I was grateful to ask Taltal some questions about her work, and I hope you enjoy learning about her process as much as I did!

About the book:
A teacup-sized little girl discovers a playground in a potted plant, and the perfect swimming pool in a glass of water. Then when she sees a mysterious shadow lurking beyond her books and paper clips, she must summon her courage. But wait! Could this fluffy, purring creature be a friend?

LTPB: Can you talk a little bit about the visual evolution of A Little Courage? As you got to know the main character, how did your illustrations change?

TL: From the beginning I knew that my book would feature a miniature character, only I didn’t know exactly what her story would be about. So in order to generate plot ideas I used visual mind maps. In this particular case I asked myself: what would I do if I was as tiny as a bug? This process let my imagination roam free and come up with fun picture ideas

One of the earliest visual motifs that stayed in the book until the end was the bright yellow colour of the little character’s shirt. In the beginning, using this colour helped me to locate her in the sketches, as she often got lost in them, being as small as she is. During the process, I began associating this colour with her courageous spirit and curiosity. I always envisioned her as a carefree independent little child with messy hair and bare feet. When the book came out some people saw her as a girl and some as a boy, which made me very happy since it allows the readers to decide who this character represents for themselves.

LTPB: What was the impetus for creating the book?

TL: The book was my bachelor’s project at the Lucerne School of Art and Design. While searching for inspiration I asked myself what fascinated me as a child, and I remembered how much I loved old-fashioned fairy illustrations and stories with miniature protagonists. So when I began working on the project I wanted to channel those feelings again and give them a modern twist.

While developing a story, I thought a lot about how miniature characters are vulnerable and at a physical disadvantage, and how they usually have to solve problems in more creative ways. That’s how the cat character got created, as it brings up a challenge and forces the girl to face her fears.

LTPB: How long did you work on it before you decided it was ready to submit?

TL: I worked on the book for about three months. Because it was a bachelor’s project, I had a strict deadline.

It was never really submitted to a publisher, since – while it was exhibited at the graduation exhibition – the chief editor of NorthSouth saw it and contacted me directly. I reworked the whole book again for another three months and even added some new pictures.

LTPB: Can you talk about the importance of nature and memory in your work?

TL: Since my childhood, nature has been a big refuge for me. One specific memory which also inspired this book happened when I decided to hide inside of an old hollow olive tree. Inside this ancient tree I could observe a new miniature world inhabited by little spiders, grass hoppers and one big fat snail. This feeling of being protected and hugged by nature is unlike any other!

LTPB: What did you use to create the illustrations? Is this your preferred medium? How does your process change from book to book?

TL: I used colour pencils, graphite pencils and digital painting. I love using pencils because they enable you to build surfaces using strokes and movements. I especially liked creating the fur of the cat that way, using graphite powder and pencil.

At the moment I really enjoy working with watercolours, especially layering them and creating depth.

LTPB: What are you working on now? Anything you can show us?

TL: I am working on a new book called Meet Me By The Sea which will also be published by NorthSouth in 2020. (The English version might be out in 2021.)

I created the storyboard during my studies. The hero of the book is a little girl who goes on a journey to the sea and on the way a mysterious creature decides to accompany her.

LTPB: If you were to write your picture book autobiography, who (dead or alive!) would you want to illustrate it, and why?

TL: Tove Jansson! I grew up with the Moomins, and I always dream of moving to Moomin Valley. I love her spirit, courage and the way her characters depict so many relatable human qualities and weaknesses.

A Little Courage publishes from NorthSouth on February 4, 2020!