Käthi Bhend’s pictures invite us to look and linger, as there are so many beautiful details awaiting discovery. It’s the same if you visit the illustrator at her home in Ausserrhoden, Zwitzerland:  you’ll find yourself on a voyage of discovery, admiring wooden paintings on the bookshelves, beautifully arranged pebbles on the window sill, and rhizomes that resemble figures and faces. The influence of nature on Käthi’s creativity is plain for all to see in her illustrations. A fine example of this is her picture book In My Dreams I Can Fly (by Eveline Hasler/illustrated by Käthi Bhend). It was over a year ago that we decided to bring out a new edition of this classic.

Every so often, books are adapted to fit in with contemporary concepts of design, and the art director decides whether a book is in need of such adaptation.“I compared current editions with those published earlier, made a record of all the visible changes, and tried to find out exactly when and why they were made, because changes are rarely made without good reason. And so I ask myself: were decisions taken in the past that I should stick with today? And what aspects of the book can I now reconsider?” —Fabienne Heeb, Art Director, NordSüd/NorthSouth.

Fabienne became very excited when she compared the recent versions to the original first edition (published by Ravensburger in 1988). In addition to modifications in the format and typeface, there had been minor and even major changes to the illustrations. Some had been touched up, but many had even been redrawn. There were also marked differences in the colors. But why? We invited Käthi to come to the office and talk it all through. She brought the originals with her.

It turned out that the original colors in fact matched those of NordSüd’s current edition (published in 2016). It also became obvious that the illustrations had undergone major changes for NordSüd’s reissue of the book in 2008.

After at least twenty years, Käthi Bhend had used this opportunity to give more prominence, for instance, to the tulip on the last double page. Now the flower is surrounded by an idyllically peaceful, starlit sky. Apparently, these changes had been made directly to the originals, which she had painted over, using opaque white for retouching to make it simpler for her to free up the appropriate sections.

Not all of these changes—which were made more than ten years ago—are right for today. Some even led to the illustrator’s original concept being partly lost. The aim of the art director then was to do some reconstructing so that the 2021 redesign would come as close as possible to the original. The following examples will show how this was achieved.

The main difference between the 2016 edition and the new one is that the front and back covers are now linked together visually as one continuous picture. The texts have been shifted, and the lettering of the title (which Käthi Bhend designed in 2008) has been slightly altered to fit in with the form of the illustration. It seemed important to link the cover and the contents together through a motif that had originally been designed for that very purpose: a passage through the earth.

Fabienne felt that restoring this connection was essential for the book. Just as the homes of the animals in the story are linked together, so are the illustrations, which connect one double page to the next. She worked together with Käthi to scan the originals and then rework them digitally, a kind of picture “restoration.” They weren’t able to completely restore the originals, because the details underneath the opaque white could not be saved. Using this technique, they were able to create a composition that corresponds to the original concept.

As for the choice of font, Fabienne decided to go for something new. The question of the “right style” always depends on context. The decisive factor is how well the letters fit in with the style of the illustrations. With “2011 Slimtype” she found a modern typeface whose “rootlike” character blended perfectly with the organic pictures. 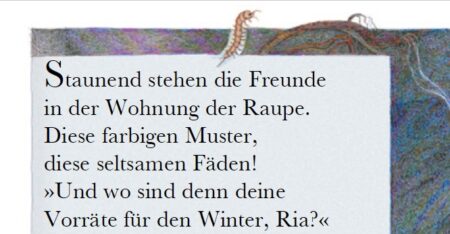 “Redesigning an existing picture book can be just as challenging as designing a new one. It’s not just a matter of defining what something should look like; you’re also confronted with what already is and has been there. But that’s the exciting thing about redesigning—you’re made to delve deeper into the existing material. You realize that if something new is to be created, often you must first go back to the roots. In this case, quite literally.” —Fabienne Heeb