Johanna Ries was born in Marl, Germany and studied illustration at the Münster School of Design. Her debut picture book, The Speckled Feather, is her stunning bachelor thesis bound between end sheets and filled with lavish scenes and textures that transport us from the comforts of our home to the African safari. Read on to see exactly how she built her world, paint layer by paint layer, and look for The Speckled Feather, in stores on May 4, 2021.

Whenever I am writing a story, I cannot really tell where the ideas are coming from. They just pop up in my head—and there they are. With The Speckled Feather it was quite similar. I had wanted to write and illustrate a children’s book for years, so when Professor Marcus Herrenberger, my mentor during my final semester, wanted to discuss the topic of my bachelor thesis, I needed an idea.

I was a child when I first started writing stories (as soon as I had learned the alphabet in elementary school). Before that, I told and drew stories with ball pens, felt pens, pencils on every piece of paper that fell into my hands, and my parents had to write the deciphered words next to my indistinguishable scribblings. Writing stories and working with paint have always been an important part of my life, especially while growing up. My siblings and I love drawing and painting, and our parents have supported us throughout the years. My brother (an illustrator himself), my sister, and I have stuck to that ever since. I think it is important to show children that creativity is never something “useless” that happens “just for fun”—but that creative thinking plays an important part in finding yourself, discovering who you are and what you love, and in how you deal with the minor and major challenges of life.

Pictured: “A finished painting that does not appear in the final book, although it can be found in the thesis version of The Speckled Feather. I am very proud of the speckled pattern on the dog’s fur.“

So in 2018, while working on my bachelor thesis, I needed an idea for a story that I wanted to spend the next couple of months on and that would convey a deeper message that was important to me. But equally important was the decision of which technique to use. I have always felt most comfortable painting with gouache, which is similar to watercolor but modified to be opaque. So it was clear from the beginning that I wanted to work with it. A huge part of my knowledge about this technique came from the amazing German-Russian artist and illustrator Aljoscha Blau, who taught a couple of gouache workshops at my university. Gouache is a wonderful paint—you can use it like watercolor, but you can also paint layer over layer over layer, stamp textures, scratch into the surface, experiment on it…So when suddenly the image of a huge, somewhat grumpy elephant appeared in my head, I immediately thought that gouache was the perfect medium. I followed the elephant through my mind, envisioned it wandering through the dusty savannah, and I remembered that sometimes birds sit on the big animals of the grasslands. I have always liked the idea of different species living together in symbiosis and getting along with each other, no matter how big their differences. I did some research and stumbled across beautiful African white birds named cattle egrets. Cattle egrets often sit on big animals in Africa and clean them of parasites; in return they are safe from predators.

White birds on the elephant’s dark skin would show a beautiful contrast, I thought, but nice pictures don’t make a story. I needed a conflict, something that disturbed the balance, something that would lead to serious difficulties, and that needed to be solved. So why not let a fancy feather blow among the birds? Something that raises one bird pretentiously above the others, that leads to envy and quarreling, but at the same time is so useless that any argument is vain. Because people have always fought about vanity and lost the really important things over it, like peace and friendship. That’s what I wanted to tell a story about: Don’t fight over useless stuff, and remember that friendship and peace are the greatest and most valuable goods we have. The elephant plays the role of a parent that lets their children learn their lessons by themselves but is always there for them and protects them from any danger. The three birds Ade (Yoruba for crown), Emem (Ibibio for peaceful), and Nuru (Swahili for light) encounter an African wild dog and, after being saved by the elephant, realize what they almost lost over a stupid feather. 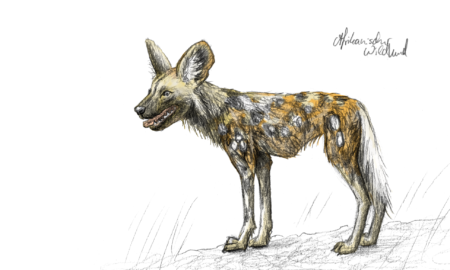 “Before I painted the animals in the style you find in the book, I drew some more realistic sketches of them, using photos for reference. This helped me to get a “feeling” for them, the pattern of fur, feathers, skin…As soon as I got that feeling, I started working on the watercolor paintings.” 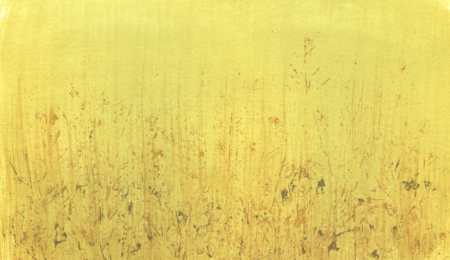 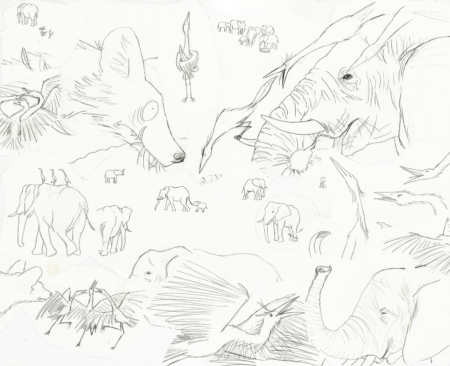 “These sketches (I glued them together some years ago) functioned as the rough drawings for the final paintings. Some of them did not make it into the final version, but I really like them and I’m glad I kept them.”

“One of the first three sketches I made for The Speckled Feather. The idea for the story came to me just hours before my appointment with my thesis mentor. I quickly drew those sketches, wrote a rough version of the storyline, and presented the idea to him. He liked it immediately.”

Another preliminary sketch completed before Ries’s meeting with her thesis advisor. 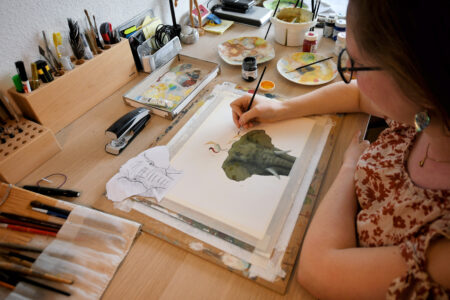 Painting in her studio.

When I paint with gouache, I like to experiment. I let layers of color run over each other, let them mix here and there by coincidence, and stamp textures into the paint. For example, I pressed a pigeon feather I found on my balcony into the wet paint on the birds’ bodies to create a unique texture. Coincidence is what I love most about analog techniques: One evening I had just finished the first layers of the elephant’s trunk where the wild dog gets smacked, and I was quite happy with the result. I placed the unfinished picture on my balcony to dry. Hours later, a thunderstorm with heavy rainfall was raging outside, and I was on my bed, amazed, watching the lightning and listening to the raindrops pattering on the leaves. Suddenly I remembered I had forgotten the painting on the balcony. Somewhat desperate, I ran outside and took the soaking wet paper in, carefully placed it on the ground near the heater, and did not dare to look at it until the next morning. But when it dried, I saw the rain had created a beautiful texture on the elephant’s trunk—something I would never have achieved without coincidence, a thunderstorm, and my forgetfulness.

Ries says, “The aardvark played a minor part in an earlier version of the story but didn’t make it into the book because I wanted to focus on the main protagonists. Elephant, cattle egrets, and African wild dog interacting so close together needed proper research about their sizes that I could use for orientation.”

Painting backgrounds is something that I had always tended to avoid until The Speckled Feather because what I love most is working on animals and their facial expressions. As soon as I paint their eyes and a character starts to look at me, the picture becomes alive. Backgrounds cannot do you that favor, of course. But for The Speckled Feather I used a technique I had never tried before: I painted and stamped sheets and sheets of textures—of ground soil, sky, water, grass (I stamped leaves and sticks into the wet paint for the grass)—scanned them, and collaged the digital images. Thus, bit by bit, I built the background of my protagonists’ world. Then I scanned the finished paintings of the characters, placed them inside the collaged world—and it looked beautiful. And as a nice side effect, I overcame my fear of painting backgrounds.

Arguments are important. They teach us how to stand our ground, how to understand other perspectives, and how to reconcile. But some arguments can be avoided. Who is the fastest, the most beautiful, the richest—Who is the best and stands above everybody else? All these questions become small once you realize what really counts: Friendship and peace. And who would give that up for a speckled feather?