Dutch author and illustrator Hans de Beer discusses how he created the lovable Lars the little polar bear over 30 years ago, and how his arctic animal captured the hearts of both his creator and his young fans, his story growing from one short tale into an entire collection.

Dear Hans de Beer,  why did you pick a polar bear to be the hero of your picture books more than 30 years ago?

I was looking for an exotic animal, which could move from one environment to another. A polar bear fit the bill very nicely, and I also found it interesting to draw. When I was at art college, we used to go to the zoo every week to draw the animals. Even then, polar bears were always my favorite.

What special quality does Lars have that you particularly like?

Lars has a natural sense of justice. He knows exactly what isn’t fair—and that’s a fine quality to have.

Why are children able to identify with Lars?

I think it’s because he behaves like a child. He’s a superhero who likes to do things on his own. But he often feels homesick and misses his parents. A lot of children probably recognize themselves as being in the same situation.

The little polar bear is always attracted to distant places. Wouldn’t he be more comfortable at home?

Yes, Lars thinks so too. However, if you look closely at the stories, you’ll see that he doesn’t travel long distances because he wants to, but because it just happens to him. He’s curious and simply stumbles into situations that take him away from home.  He doesn’t look for adventures—they find him.

I simply do what I enjoy doing.

Which do you prefer—going away or coming home?

My partner and I have two homes—one in Amsterdam and one in Florence. And so I’ve had plenty of experience going away and coming home. After a few months, it’s lovely to go back to Italy or Holland, and when we’re there, it’s also lovely to make the return journey. If you never go away, you can never come home again. That’s also a means of identification for children. They like going away, but only because they know that they can also come home again.

Lars is generally brave. Are you brave, too?

No, I’m not brave.  But Lars isn’t always brave either — he’s often afraid. When he is afraid, though, he doesn’t run away but conquers his fears. And that is a very brave thing to do.

Originally, you’d planned to write only one story about the little polar bear.

“Planned” is a big word for the first Lars book. I started with an idea and drew eight pictures for my final exam. Everyone liked them, and so I drew some more and a story developed out of them. In 1986, I submitted my work to the Children’s Book Fair in Bologna, and that was where I made contact with NordSüd Publishing Company in Switzerland. After the publication of the first book, NordSüd asked for a new story. I said, “Okay, but the second book will be the last.” Then after a few years, I had another idea. And that’s how it went on. If I’d known in advance that there were to be twelve books, I’d never have been able to write them. As it is, though, I’ve always gone back to work on my little polar bear with renewed pleasure and enthusiasm.

When I asked what was the secret of your success, you replied: “I simply do what I enjoy doing.”

Generally we should do what gives us pleasure, and not think too much about the public. On the other hand, I’ve created books, which I thought were really great but which were not as successful as Lars. It’s difficult to explain. But perhaps one  can’t explain success, because otherwise one could plan for it. The fact that Lars is so popular is certainly connected with his personality and with his view of the world.

What are Lars’ wishes for the future?

Lots of ice and not many humans. I hope that he will actually still exist in 30 years’ time. Lars’ environment is also our environment. What I wish for Lars I also wish for us.

Discover the entire world of the Little Polar Bear here. 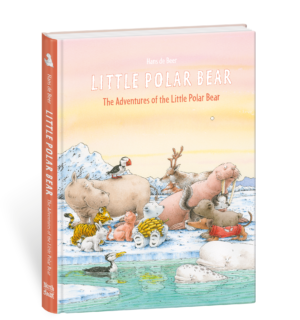 The Adventures of the Little Polar Bear