Interview with Marcus Pfister, creator of the Rainbow Fish series

Thirty years ago, a little fish with glittering scales began a journey which took him all around the world. Marcus Pfister talks to us about the Rainbow Fish and his new book, Rainbow Fish and the Storyteller, which contains a pack of lies and a clever way to conquer them.

The Rainbow Fish is thirty years old! Many children have grown up with our shining hero and now have children of their own to whom they read the adventures aloud. How does it feel to have your stories passed on from one generation to another?

It’s a wonderful feeling! It’s especially precious today – at a time when things change so quickly – to have something that you’ve created still having an impact.

Do you sometimes come across the Rainbow Fish unexpectedly in the course of everyday life?

There are often surprising encounters on social media. I keep getting unexpected messages that find their way to me from all over the world.

Where is the most unexpected place you’ve seen him?

That was Nepal. Shanta Dixit asked for my permission to translate the book into Nepalese, and invited me to a little book festival in Kathmandu.

Are you famous for being the father of the Rainbow Fish?

My name is famous, yes. When I say who I am or have to give someone my name, they often start asking about the Rainbow Fish.

In the new adventure, the story is basically about telling lies. Why is this such an important subject for children?

Unfortunately, you can’t believe absolutely everything you’re told. I think that was also a problem in earlier times, but recently it’s become increasingly topical. Of all people, children – who are naturally open-minded and trusting – need to be prepared for this. The book should stimulate new thoughts and discussions. 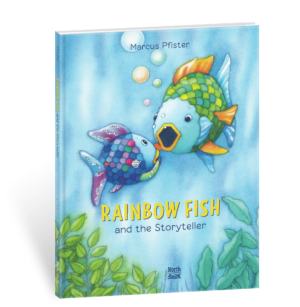 Rainbow Fish and the Storyteller

In the new story, the other fish believe Humbert, whose tall tales fill them with fear. The Rainbow Fish, however, challenges him. That takes a lot of courage, doesn’t it?

Not all of the fish believe Humbert’s lies, but there are enough of them to make the shoal feel insecure. It’s important to put things right and to not just ignore them.

This subject is extremely topical. And the heroes and heroines of picture books are always characters that young readers can identify with. In this situation, what aspects of the Rainbow Fish would you like children to copy?

I’d like them to have the courage to form their own opinion and express it – and I hope the story of the Rainbow Fish will help them to do so.