On April 16, 2022, Zippy Chippy died at his retirement home in Cabin Creek near Saratoga Springs, New York State. Zippy Chippy was a racehorse with almost royal ancestry and a glorious future. But for Zippy, the journey mattered more than the destination. Artie Bennett, who wrote a picture book about Zippy with illustrator Dave Szalay, attended the funeral and gave a little farewell speech, shared here.

It was sheer serendipity that led me to the story. I happened upon a newspaper article about Zippy Chippy and read it with joy and amazement. And I knew, right out of the starting gate, that I wanted to bring his fascinating tale to young readers. The more I learned about Zippy, the more certain I was that his story would both touch and delight youngsters, just as it did me.

Here was a horse who ran 100 races and lost every single one! In the process, though, he became a beloved folk hero, just like his champion ancestors. And to top it off, the horse was still alive, at a retirement facility for graying racehorses in upstate New York, where he had achieved celebrity status. I knew I had to visit Zippy, too, so I took a trip a few years ago—and was deeply moved by my visit. He was so well cared for at Old Friends at Cabin Creek, where he was showered with love. There were so many remarkable elements to his story. It was time to knuckle down and write.

Zippy touched me in a way that no horse had ever done before. I fell in love with that horse. Everyone loves an underdog, and Zippy was the ultimate. He was full of mischief and something of an oddball. And there was our shared affection for ice cream. His name alone, silly as it is, added to the mystique.

Zippy teaches us that winning isn’t the only thing that matters.

I think that children will naturally identify with Zippy. Zippy teaches us that winning isn’t the only thing that matters. The important thing is to try—to give it your best shot. That’s how we develop character. It’s found in the effort. Zippy loved being a racehorse and he loved to compete. He just wasn’t very good at it. Later in his career, huge crowds came to cheer on Zippy, and he developed legions of admirers, even as his losses continued to mount. Ultimately, I want children to learn that losers can still be winners.

Zippy was a model of determination and stick-to-it-iveness. He teaches us to never give up on our dreams, even when their fulfillment may be somewhat elusive.And he reminds us that sometimes we need to stop and smell the roses.

I would love for young readers to be inspired by Zippy Chippy’s life story. And also to find acceptance. Acceptance in the fact that we aren’t all blessed with the same gifts—and that’s okay, too. Some of us are great at sports. Some of us aren’t. But that doesn’t mean we shouldn’t participate. That’s where true courage lies. We all have limitations.    We need to accept our limitations, just as we celebrate our strengths. Remember Zippy Chippy, who competed well into his thirteenth year, long past the age that racehorses hang up their halters—and try your darndest! By doing so, you’re already a winner. Even if you finish at the back of the pack.

At my very first public reading, which took place at a small independent bookstore in Queens, New York, just before the pandemic struck, an adorable little girl raced up to me afterward. She gave me the sweetest hug and cried: “I love Zippy Pippy!” Mmm. Don’t we all. 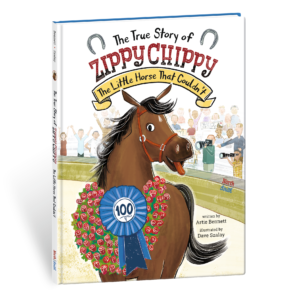 The True Story of Zippy Chippy

The Little Horse That Couldn't