Interview with Amélie Jackowski, illustrator of the Badger series and Doctor Mouse

Amélie Jackowski has illustrated numerous picture books for NorthSouth and NordSüd Verlag, including a series of books about grumpy Badger such as The Day Everything Went Wrong and The Bad Mood. The newest book in this bright and humorous collection, Badger is Bored, was released by NordSüd in 2021, and will be released in the US on April 19, 2022. This blog features excerpts from an interview conducted by Martin Walker in 2021 to celebrate NordSüd’s 60th anniversary.

Amélie Jackowski is sitting in Marseille, not far from the Old Port, in the Atelier du Baignoir, which she shares with five other illustrators. Her workplace is the kitchen of what was once an apartment. White tiles on the walls and long tables covered with paper, paints, brushes, books, and other objects. She was offered her first commission by NordSüd while she was still a student—but she didn’t fulfill it. She wonders now if perhaps it was a bit too early. However, she was given a second chance, and the result was a book that has remained in the program ever since.

Which book fascinated you most when you were a child — and why?

The book that I found most fascinating was Gertrude’s Child by Richard Hughes, with illustrations by Nicole Claveloux. Because it’s very visual, colorful, very much in the style of the seventies—and with a story that turns the world on its head. It’s the doll, the wooden doll Gertrude, who buys a little girl, not the other way round. That was a mind-blowing revelation—that books are there to open up all kinds of possibilities. I always had a big appetite for books, and I could already read when I was four and a half. Since then I’ve read lots and lots of books.

Did you always want to be an illustrator?

No, as a child I wanted to be an archaeologist and find dinosaur eggs. Then later it was biology and especially genetics that interested me—and also drawing. After the baccalaureat I decided in favor of art.

You moved from Toulon to Strasbourg to continue your studies.

It was like moving to another country. I started my studies in Aix-en-Provence, and then I moved to Strasbourg, which was completely different—the mentality, the architecture. And it was a wonderful art school. I made lots of friends there. But above all there was Claude Lapointe—himself an illustrator—and he taught us to tell stories by way of pictures.

In 1999, when I was still a student, I entered a competition run by the Children’s Book Fair in Bologna, and some of my pictures were exhibited. Then the day after I finished my studies in Strasbourg, with my diploma fresh in my pocket, I received a letter from Brigitte Sidjanski saying that she’d seen my pictures in Bologna and would I please send her some others so that she could see if I could paint as well.

That was back in the last century, when emails and the Internet weren’t so widespread. Anyway, we wrote letters and faxed each other, and then she asked me, “Would you like to work for us?” Imagine, I was just twenty-three years old! Of course I said yes, and Brigitte sent me a story to illustrate.

So that became your first book?

No, it didn’t. I just couldn’t get on with the story—it was about animals on a farm. I was really upset because a contract with NordSüd was so prestigious; I didn’t want to lose it. And so I struggled with the story and with myself, and kept putting off the evil moment until at last I took the plunge and told her that I couldn’t illustrate that book. To my amazement, she wrote back, “No problem. I’ll send you a new story.” And that was The Bad Mood by Moritz Petz. It became a best seller, and was translated into lots of different languages.

Boredom is something valuable – it gives us the chance to reflect, so we learn a bit about ourselves.

Imagine: Brigitte Sidjanski and I never met face-to-face—we only corresponded with each other. I once met Michael Neugebauer in Bologna. After the bankruptcy and takeover, I also met the new owner, Urs Gysling, in Paris—at that time there was still a French branch of NordSüd. And in 2015 I was invited to Zürich. That was very funny because by then I was an “old” illustrator and so they were surprised when I came through the doorway. “Oh, but you’re so young!” We laughed ourselves silly. I love the team. What I really like about NordSüd is their loyalty. We’ve been working together for so many years, and that’s rare in this fast-moving, international book world.

Which of your books are you most proud of?

It’s one that’s only been published in French and for which I also wrote the text. It’s meant for small children and their parents, for when they spend a few sweet moments together before they say good night. It’s called Chut! Il ne faut pas réveiller les petits lapins qui dormant [“Sh! We mustn’t wake the little sleeping rabbits”]. The book is very graphic, and it’s calming—a bit like meditation. I had a lot of fun working on the right sounds and playing with the music of the words so that they harmonize with the pictures. Little children love it!

And what’s the book you’d like to produce next?

I don’t know yet, but there’s an idea developing in my mind. What I can tell you, though, is that the latest book I have illustrated…is about boredom. Boredom is something valuable—it gives us the chance to reflect, so we learn a bit about ourselves. Maybe grown-ups could encourage kids to enjoy it instead of immediately switching on a film for them.

However, the older I get, the more convinced I become that overproduction has to be cut down. We should look around us and appreciate what already exists. I miss the insight that perhaps we already have everything we need—and that also applies to the environment. We should learn to listen more and generally to pay more attention to what we have. This is also something I like about NordSüd—they cherish their backlist. 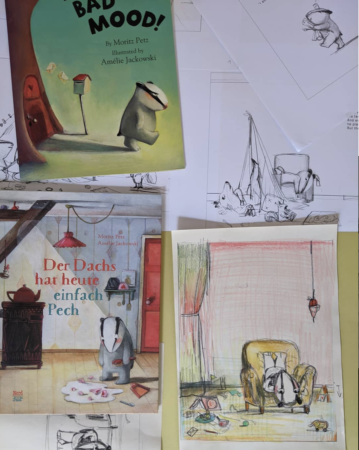 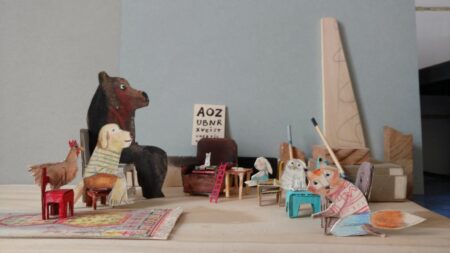 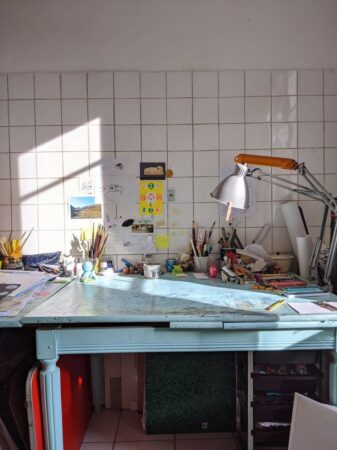 For NordSüd books it’s always acrylics. And so the most important tool is a brush that does exactly what I want it to. When I get a new text, I start by drawing lots of little sketches, trying to capture the characters. Once, with Doctor Mouse, I also cut out the figures and built a proper little theater in order to see if I’d got the relative sizes right. As you know, children look at things very closely, and they can see at once if something is wrong. Then I start on the double pages, trace the characters using my light box, take account of the rhythms created by the text, and add little surprises when the page is turned. Next I work on the details, the atmosphere, the colors, the lighting. And when all that’s done, off it goes to the editor. Publishers can be very critical, but for the most part they give me a free hand.

Sometimes I’m not happy with the story I’ve been given to illustrate, for example if the characters are just stereotypes. Then sometimes I try to make changes, because I have to be in tune with the message of the book.

Are there fashions in illustration?

Oh yes, fortunately there are always new trends. And in that context I regard my illustrations as rather traditional. But that doesn’t matter to me because it’s important for me to remain true to myself. Both with other people and with my work.

… it’s important for me to remain true to myself.

Did you read books to your two children when they were young?

Of course. And I discovered that there were lots of books I hadn’t liked very much initially, but then I appreciated their quality and succumbed to the charms of the storytelling.

What’s your best time for working?

In the morning, because I don’t like artificial lighting—it falsifies the colors. Fortunately the light in my studio is lovely because the window faces east. After lunch I go for a walk—that sparks the creativity—and I come back in the afternoon and start painting again until the light fades. I have the feeling that I spend quite a lot of time in the studio. But I like to work on the first sketches and ideas for a book in a café, where there are people all around and plenty of background noise. My great luxury is the fact that I’m free to work as I please and at my own tempo.

And is there anything about yourself that you wish you could change?

I wish I was more daring, more courageous, more adventurous! 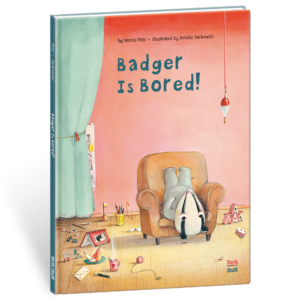