With his epic collection of poems Metamorphoses, the Roman poet Ovid created one of the most influential works in the history of world literature. These ancient tales have undergone countless new interpretations in all forms of art, and now this selection of stories has been published for the first time as a picture book. The award-winning author Heinz Janisch has adapted his selection of these myths in language that is both powerful and poetic, but at just the right level for young readers. Ana Sender has provided beautiful illustrations which vividly convey the atmosphere of these wonderful stories. In this interview, conducted originally by parent company NordSüd, the artists discuss their experiences with Ovid’s myths and how their adaptation The Golden Age came to be. Interview translated by David Henry Wilson.

Do you have any personal predilection for Ovid, or for classical literature in general?

Heinz: I got to know the Ovid poems during Latin lessons at school. I was fascinated by them and also by his own life story, and they suddenly made me pay a lot more attention in class! Later, when I studied German literature, I realized that stories from Metamorphoses kept reappearing as important building blocks of world literature, because they had influenced so many authors.

Ana: You can’t help getting to know them – there are so many versions. Our own literature constantly draws inspiration from the classics.  They appear in children’s books, you study them at school, you watch films…I once did some work for a Spanish fashion company, illustrating part of a collection which was based on myths from Ovid’s Metamorphoses!

Heinz:  The subject of transformation has always intrigued me – it also plays an important part in a lot of fairy tales. Anything is possible. In fact, it seems to me to be an important factor in life generally – our desire for change, or conversely our fear of it, that suddenly everything could become different. Basically, you could say that we live every moment with some kind of change.

Basically, you could say that we live every moment with some kind of change.

What did this project mean for you personally?

Ana: It was a real gift for me. The editors at NordSüd wanted me to express my own personal view of each story. You don’t often get such freedom when you’re commissioned to illustrate a book.

Heinz: The project went straight to my heart. I wanted to make the magic of these tales as real as possible to as many readers as possible – regardless of age.

What were your feelings as you worked on the book?

Heinz:  Wonderfully absorbing. Just reading the stories gave me weeks of immersion in this amazing world. I started by reading all of them – about 250, covering about 600 pages full of excitement. That was an experience in itself: from the beautiful and tender to the cruel and bloody. No wonder the subjects have found their way into so many works of art. For our book, I eventually focused on 17 of the tales. It wasn’t easy to choose. But it was hugely enjoyable then to see how the book slowly took shape with each newly told story.

Ana: There are so very many pictures and descriptions of these myths, and it was difficult for me to free myself from them and try to contribute something new. That’s really almost impossible. And so I used some of these descriptions, but at the same time I also tried to draw inspiration from other sources, like paintings and films and so on, which had nothing directly to do with mythology. And then I let all that run through the filter of my own imagination. I was fortunate in that my editors had complete faith in my choices and allowed me to experiment and to give a very personal touch to the work. 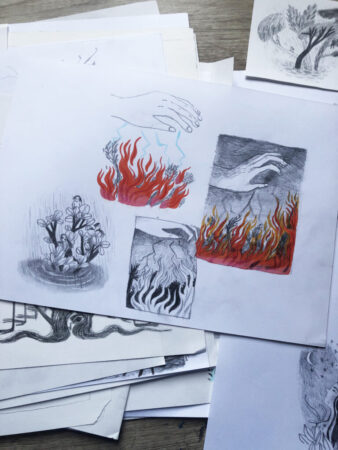 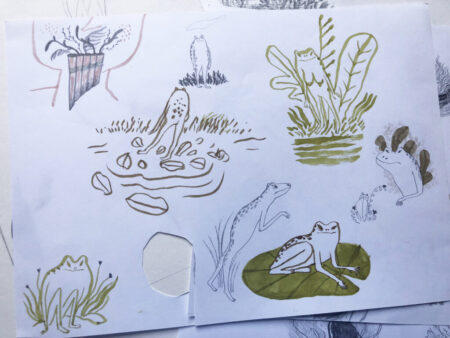 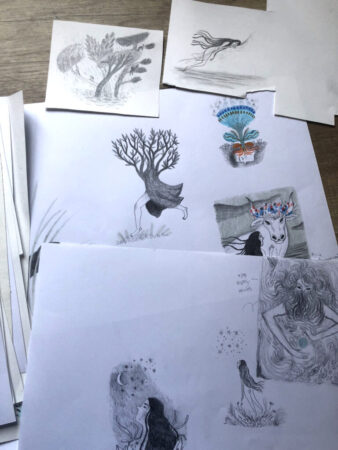 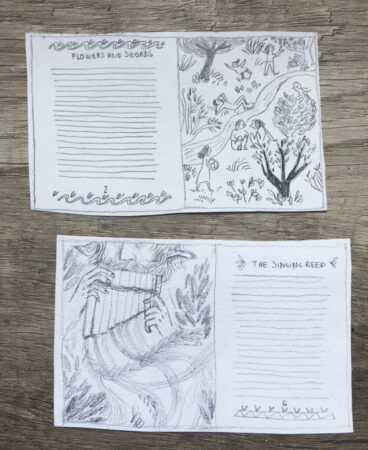 Heinz, you’ve already ventured several times into other major works of world literature. How did you set about finding your own language for them?

Heinz: Each book poses an all-important question: how do you respond to it? I find texts like the Bible or Metamorphoses strangely calming. I might almost say they give me a kind of inner strength even as they stir something up inside me. These tales require a clearly focused vision. And that’s how I want to tell them – calmly, clearly, stimulating the reader’s imagination,  in a style that doesn’t sound forced or unnatural.

Ana, tell us about the techniques you used for the illustrations.

Ana: I simply tried to let the project itself guide me. For a while, I worked with nothing but digital techniques, but then I felt the need to go back to analog. And so I used watercolors, colored pencils and crayons – whichever seemed right for each illustration. But I went back to digital for the final touches.

How did the two of you get on together?

Heinz: Through my love of picture books I’ve learnt to let go. The text comes first, and I hope that it will open up plenty of openings for pictures. I hardly ever get involved in the illustrator’s work. Words and pictures should co-exist at the same level, and that means that author and illustrator should both be as free as possible to express themselves. And so I wait in suspense – and then I look on in amazement and sheer delight. Ana has enriched the book with her superb pictures!

Words and pictures should co-exist at the same level, and that means that author and illustrator should both be as free as possible to express themselves. And so I wait in suspense – and then I look on in amazement and sheer delight. Ana has enriched the book with her superb pictures!

Ana: Throughout the whole process, I had no contact with Heinz. He got the illustrations from the editors I worked with. When I was first told that I was to illustrate Heinz’s stories, I rushed straight to the library to get some of his books. I think he’s a very special writer, and I feel extremely honoured to have illustrated his texts.

What do you both wish for your book and its readers?

Heinz: Perhaps that the book will arouse interest in other great works of world literature, and also a desire in readers to create their own transformations, in writing or in real life…And I hope it might encourage them to enjoy the sheer pleasure of storytelling.

Ana:  I hope it will be timeless. That it will become one of those books that people cherish like a treasure on their bookshelves, and return to every so often, to relish at their leisure. Thank you for talking to us. 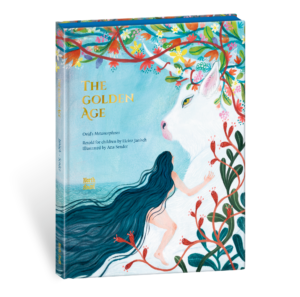